When the Student Becomes the Master Gardener

“Master Gardener” sounds like quite the level of prestige but my friend, Terrie Thamer, is as down to earth as it gets… literally. With a garden in Gainesville known for its wild perennials, wonderful textures, and sprouting vegetables, Terrie is an amazing gardener and ally to the environmental community. She has worn many hats in her life: public accountant, professor, community member, wife, grandmother, but after retiring, she decided to take on a new role and expand her knowledge of gardening to its fullest capacity. Here is her story and her advice to anyone wanting to become a Master Gardener.

Terrie grew up in Iowa Falls, Iowa, a small town where everybody knew everybody and farming was a part of life. Her father was an agriculture major at the University of Missouri and consequently, her family always had a vegetable garden. She grew up learning about plants and would continue to grow things everywhere she lived. Terrie’s fond memories of her childhood would later influence her desire to be connected to a smaller community, a neighborhood like the one she lives in now where she can share her green space with all creatures, furry and human alike.

While working in Georgia in 1998, Terrie wanted a house big enough for all her grandchildren and a green space large enough for the many projects she had in mind. She worked with a landscape designer and built a waterfall in the back with a pond surrounded by a variety of plants and flowers. Her front yard was the largest area and became very expensive to maintain.  It was during this time she learned a lot about trees, maintenance, and the things she did and didn’t like about having a big space in a big subdivision. Terrie describes this neighborhood as “transient.” She said, “At the time there were maybe 500 homes there, and now they have probably built nearly 1,500.” Terrie and I actually both lived in this subdivision, but it was not until after she moved that we met, if that tells you anything about how big it was. In 2010 her grandchildren were getting too old to spend the night frequently. Terrie decided it was time to downsize. Smaller home, smaller community, smaller space to garden. Though she loved her big backyard, she was ready for the next chapter.

Terrie was teaching at Brenau University in the graduate accounting department when we met. I was also there teaching management. She had just moved into her new home, a remodeled house originally built in 1949 that still had all its old charm and a nice patch of earth for planting. Located on a cul-de-sac in a wooded neighborhood filled with other old houses and close to Brenau, she said it was love at first sight. But, she admits it needed help. After buying the house, she tried grass and mulch and other things that didn’t work for planting in the lot. There were a lot of factors to consider for her heavily shaded yard. Terrie then reached out to me to create an initial plan for the garden. And the rest is history! We’ve been friends ever since. Over the years I have helped her with a variety of projects.

Fresh from retirement in 2014, Terrie’s first priority was to become a Master Gardener. She was ready to give her “left brain” a chance and try something new. Have you ever even heard of a Master Gardener? Even though there are Master Gardener programs in almost every county and state in the U.S., not many people know about it.

The Extension Master Gardener program (EMG) was started in 1972 in Washington state by Dr. David Gibby. Since then, it has reached all 50 states, several Canadian provinces, and even other countries like South Korea. It was uniquely designed to train volunteers to be environmental leaders in their community. Different universities in each state are in charge of their respective programs. In Georgia, the EMG is run by UGA Extension. According to the UGA Extension website, Master Gardeners are passionate individuals who “teach community members how to use gardening to improve their environment, personal health, and quality of life.” If you want to learn more about the federal program and see where you can get connected in each state, check out their website here. We will do a more in depth blog about becoming a Master Gardener in the near future.

To become a Master Gardener, Terrie initially went through 3 months of classes, 2 days a week, with tests. She speaks fondly of these learning moments. UGA faculty and people from all over came to teach about various subjects and aspects of horticulture. Terrie says there was even a class with “Tomato Ron”, a guy who only grows tomatoes and yes, that is his name. More than anything, Terrie felt that these classes helped her form educated opinions on her own garden. She became more confident when working with plants along with other people and is now able to tell when someone is actually knowledgeable and good at listening to her wants.

After 3 months of training, Terrie was then required to do 50 hours of volunteer work. She maintained public gardens, worked events, and managed a hotline at the Extension office where people called with gardening questions. Now that Terrie is officially a Master Gardener Extension Volunteer (MGEV), to stay current, she has to volunteer at least 25 hours each year and continue to support the organization’s initiatives. For Terrie, the EMG is an opportunity to learn more, connect with fellow gardeners, and help others in their desire for a healthier, greener community. To learn more about how to become a Master Gardener in Georgia, check out UGA Extension’s website here for more details.

Terrie’s garden in Gainesville is what some describe as a meadow. People frequently walk the old streets of her neighborhood and take pictures in the spring. Some of her flourishing gems include hostas, hydrangeas, purple coneflowers, rudbeckia, lenten roses, bee balm, day lilies, petunias, daffodils, and asian lilies. She believes in planting a lot of perennials because, “we have to take care of birds and pollinators.” Terrie also has an herb garden with purple oregano flowers “that the bees just love” and what she calls a “texture garden” with lavender, velvety lamb’s ear, black eyed susans, coreopsis, yarrow, and catmint. The catmint grows blue flowers that the neighborhood cats love to lay and roll around in.

Terrie shares everything with her neighbors and even lets them come pick what they want when they want. She believes in creating connections with her neighbors through support and love. As she watches people stroll by walking their dogs and playing with their kids, she is reminded of her hometown in Iowa and the community she had there.

Though I initially helped plan Terrie’s garden and pick out a lot of her trees and shrubs, now she says “things just grow here.” A lot of the items we planted got much bigger than we ever intended and some didn’t last. But we agree that this is just a part of gardening: being flexible. Recently, she had to remove a large tree which changed the whole sun/shade ratio along with water levels for existing plants. Everything planted near the tree suddenly grew very quickly since it wasn’t competing for water anymore. A maple tree grew 5 feet in the year after she took down the tree.

Some of the projects we have helped Terrie with include stone stairs to help navigate the narrow terraces in the back of her garden, pruning the bottom of her loropetalum bushes to turn them into trees, and lots of suggestions and help with decision making on various issues over the years.

Other than volunteering as an MGEV or harvesting green beans for her neighbors, Terrie has also taken up pottery in her retirement because I guess there is nothing she can’t do. Though a recent knee surgery has kept her from doing any hard labor in the garden, she still enjoys strolling down her winding stone walkway and taking in the beauty and peace of her wild meadow. Terrie says, “I very much enjoy the beauty of the garden and watching the bees, butterflies, and birds. It is very peaceful and rewarding to have created this space and watch God’s creatures use and contribute to it.” 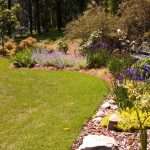 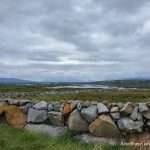 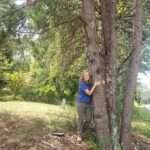