Jason and I recently went on a much overdue vacation to Ireland. It was magnificent. We biked along the coastline and through the rolling green hills. We were surrounded by gorgeous scenery including castles, cliffs, rivers, lakes, many coastal trees and plants, and lots of winding, ancient, beautiful stone walls. As masons and landscape designers, we had to wonder, where did all these artful walls come from? In a career like ours, when inspiration is all around you, you never really stop working.

Jason and I decided to educate ourselves on these stone walls because mainly, we were curious. We are always looking to learn more about the history of our profession and how it has changed so much over the years. As is true in any art form or practice, understanding the past informs us of the future. We also wanted to know more because we thought it would be interesting to relay to our readers. So, here we are. Thanks for joining us!

To start, we had to learn about the stone. Everywhere we went in Ireland, we saw stone. All different kinds of stone placed together in creative and interesting ways. We learned that Ireland’s terrain consists of many different types of rock. Depending on the region you find yourself in, you might see Limestone, Old Red Sandstone, Granite, Basalt, glacial deposits of sand and clay, and even metamorphic rock. We also learned you will see more stone walls in the west than the eastern parts of Ireland because there is more naturally occurring limestone and rocky terrain in general in that area.

Because the Earth is constantly evolving, over time Ireland’s land has changed a lot. It used to be almost entirely rock with very little soil. That’s why we see so many rock walls from back then. It was only less than 200 years ago, during the years of the Irish Famine, that Irish farmers built most of them. They would use existing stone to build walls that separated their fields to protect livestock and crops. This was also a way for them to clear their fields of excess stone and make room for growth. I guess you could say they were killing two birds with one stone (probably more stones but you get the joke).

Something unique about these ancient walls is that they did not utilize gates. This is where the “dry” aspect of these walls comes in. According to dtjdesign.com and some of the folks I talked to while I was there, “When livestock needed to be moved from one field to the next, the farmer would deconstruct part of the wall, move the animals through, and then rebuild the wall. This was possible because the walls were built without mortar. In fact, they were built without even a foundation.” Jason and I have trouble imagining building a wall that will last without a foundation. But people somehow still utilize this art form even today.

Without any form of mortar or concrete, the craft of dry stone walling includes careful rock selection and spatial awareness. The wall’s success is based on the weight of the stones and how they are placed together to create durability. Here is a quick how-to if you want to try your hand at building your own dry stone wall.

Dry stone walls, also known as dry stacked walls, are a rich architectural tradition seen throughout many cultures and moments in history. Because they are often built of local stone, they reflect each area’s cultural heritage and utility. As an acknowledgement of respect for their roots, designers are building new dry stone walls both in Irish communities and landscapes around the world.

The dark gray seen in a lot of these walls is most likely Limestone, a common type of rock that is also found in Northern Virginia, where we completed a fantastic stone landscaping project a few years ago. We are very familiar with Limestone.

Here are a few more pictures of the various and creatively built dry stone walls we saw:

A few more pictures of Ireland scenery because why not? 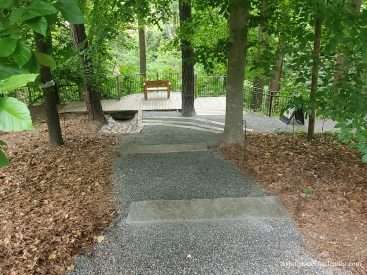 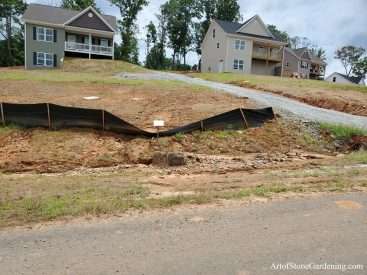