Last October—October 2nd to be exact—we had a little blog chat about pruning. Remember? I was on my annual crusade against general, indiscriminate pruning in late fall, and I promised if you put away the shears and loppers then, the time would come in the spring when it would be okay to bring them out again. Even then, though, I warned, it should only be for a light pruning and thinning out. I’ll be the first to say that pruning is important to a beautiful landscape. These gorgeous maple trees at a private home have been expertly pruned so the light filters through the leaves and accentuates the character of the branches.

But this is seldom the result when overzealous homeowners or landscapers (I’m not naming any names) grab their tools at the first sign of spring and head outdoors to snip, clip and hack everything coming up out of the ground. Sometimes, the results are more, well… disturbing. This camellia never bloomed because it was pruned every year at the wrong time. No comment on the holly balls.

The first day of spring this year is March 19, and the average date of the last frost for most of us in Northeast Georgia is mid-April, give or take a couple of weeks. There are several good calendars out there that indicate what month particular plants should be pruned, and they can be helpful reminders if you have a lot of different types of plants to tend. But as for me, I tend to be a little less punctual with my pruning. And a little less punitive, too. There are a lot of things I’d rather be doing with my time than cutting my plants.

Just because a calendar says azaleas in Zone 7a should be pruned in April, doesn’t necessarily mean I need to prune my azaleas then. If we had a very early spring and my azaleas bloomed in March, I might prune them in March, since they need to be pruned soon after they bloom. Then again, I just might not prune my azaleas at all.

My approach to landscape design is to choose the right plants in the right numbers for the right places. When I follow my own advice, my plants tend to stay healthy and happy. They don’t outgrow their spaces or invade other plants in the garden, so I don’t have to constantly worry about keeping them in check. They don’t get so big that they block windows and have to be cut back to the quick. They don’t become weak and diseased and have to have sections removed because the soil was too damp or there wasn’t enough sunlight.

All these factors add up to a pretty low-maintenance garden. When I do head outside with my hand pruners and lopping shears, I might be doctoring a few broken branches after a storm, shaping a tree to highlight certain features, clipping a few branches to allow more light and air into the center of a shrub or removing a branch that’s growing in a funky direction or creating a hazard. That’s about it. The plants in my landscape look natural because I don’t go out and hack everything up in the spring. Or fall.

When:  Pruning by the Watch

So, assuming you won’t be going on a wild, pruning rampage just because it’s spring, let’s talk about timing your trimming. I don’t mean precision timing, as in looking at your watch. I mean literally watching what’s going on in your landscape. I suggest doing a spring walk-through of your landscape before everything leafs out—while you can still see bare branches. Have any of your trees, bushes or other plants suffered damage over the winter? Are there branches that are tangled up and rubbing against, or crossing over, each other? Are the limbs and branches of any plants too dense? Any evidence of disease? Are there plants that might be prettier if you shaped the canopy a bit or exposed the trunk more by clipping a few limbs or shoots? These exquisitely trimmed crape myrtles I passed by while visiting the North Carolina coast are perfect examples of how proper pruning can showcase the trunks, as well as the canopies, of these lovely trees. Unfortunately, many crape myrtles suffer unmerciful disfigurements at the well-meaning hands of over-enthusiastic home pruners,.

If you find a few plants in your landscape that need to be trimmed up or thinned out to be healthier or look more attractive, that’s when you should act. If you don’t know already, learn the names of the plants needing attention. Once you know them, there are some general rules of thumb you can go by to determine when to prune them.

There’s an informative publication on pruning ornamental plants in the landscape, put out by the University of Georgia Extension, that you might want to read. It gives a run-down on pruning tools, describes proper techniques and provides detailed guidelines on when to prune specific plant groups. You’ll probably need to do a little extra studying up before attempting to prune certain specimen trees. Or ask a pro for some help. I’ll be happy to give you some tips. The graceful trunks of the crape myrtle shown here in the foreground frame another breathtaking scene at a garden center. Mature crape myrtles are low-maintenance and don’t actually have to be pruned, but shaping them when they’re young and removing “suckers” from the base of the trunks can produce extraordinary results.

When it comes to pruning, I think I’m pretty well adjusted, and you might be happier in your own landscape, too, if you can get your pruning anxiety—or obsession—under control. Remember:  there’s not any one season for pruning. Know what’s in your yard, notice when a plant seems crowded, overgrown, misshapen or unhealthy, find out the best time to prune that plant, and put that date on your own calendar. 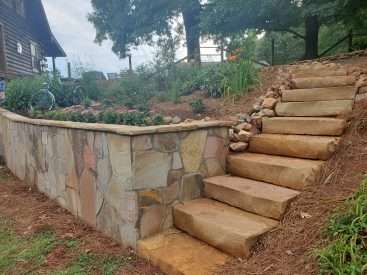 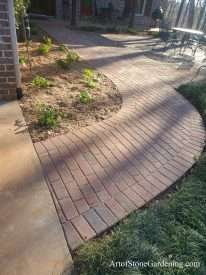